Pins and Needles officially releases on August 25th! It's been scary counting the days until Pins and Needles is finally available. The fact that so many awesome books have come out this August makes it a little easier to escape the reality that I, as usual, suck at marketing.

It turns out I've also go no talent when it comes to finding homes for paperbacks. Giving books away, though... that I can do.

As usual, I'll provide free shipping and the giveaway is open to readers world-wide. Just follow the Rafflecopter instructions below for options to enter! 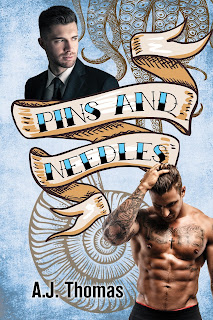 The truth is rarely seen on the surface, and getting to it might mean digging deep….

After a devastating accident and a long stay in the hospital, the last thing petroleum engineer Sean Wilkinson wants to deal with is the settlement the oil company tries to force on him. He’ll never be able to work in his field again, his education is all but useless, and his surgeons are pessimistic about whether he’ll ever walk again. He needs someone in his corner, but most lawyers take one look at his tattoo-covered father and turn their backs. It’s just Sean’s luck that the one attorney willing to give him a chance is also the hottest guy he’s ever seen.

As a trial lawyer, Nate Delany has a lot to prove—to his father, the world, and himself. Sean intrigues Nate, and he struggles to reconcile the gifted tattoo artist he can’t stop fantasizing about with the quiet, brilliant engineer. His investigation reveals facts left out of the accident report—including an illicit affair, greedy coworkers, and a vicious corporation that will do anything to protect its bottom line. When Sean’s life is threatened, winning Sean’s case, and his heart, becomes a lot more dangerous.