I've been so busy over at the Dreamspinner Press Blog that I've ended up neglecting my own! But it's the official release day for Sex & Sourdough! This is my second novel, and my first crack at a contemporary boy meets boy romance! 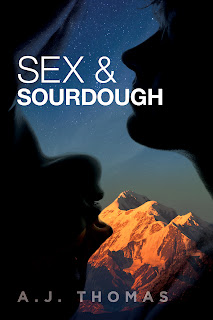 Anders Blankenship never intended to hike the Appalachian Trail alone, but when his boyfriend cancels, Anders steels his courage, leaving the abusive relationship to tackle the long-distance hike. Though a hiking virgin, he’s glad he made the decision when he receives threatening messages from his ex. Luckily, Kevin, an experienced backpacker, takes him under his wing.

Kevin Winters isn’t looking for a hiking partner, let alone a fling with a cute man on the rebound. After learning he has the autoimmune disorder that killed his father, Kevin left his family to wander remote trails. Convinced his future holds only pain and death, Kevin refuses to get close to anyone. The family sourdough recipes he recreates over a campfire are his only solace.

In the wilderness, Anders and Kevin discover a lot of common ground. While the future holds uncertainties they may not be ready to deal with, it might also hold the chance for happiness.


Buy from Amazon
Buy from Dreamspinner